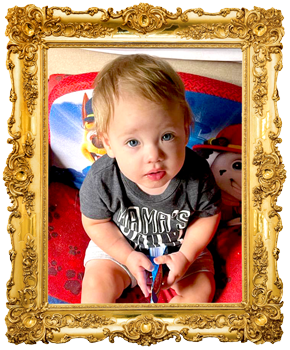 Dominik was born with no issues, and the doctors believed that he had no medical issues. Brittany, his mother, started to see something
was not right with Dominik when he was 2 months old. The pediatrician recommended that Brittany take Dominik for an ultrasound, and that's where Dominik's life changed.
After the ultrasound, the doctors recommended that Brittany go from their
office straight to Westchester Medical Center. The doctors saw that he
was not fine at all; his vitals and labs were off, and his tiny body was in
distress. They intubated him that day. He was placed into an induced
coma until November. Dominik was diagnosed with Cellular MesoBlastic
Nephroma, which is found in 2% of Caucasian males. Mesoblastic
Nephroma is a tumor of the kidney cortex. His tumor grew into his left
kidney, and they had to remove the tumor and the kidney together. He was
on 24-hour dialysis post surgery, was placed on a feeding tube and
had a small stroke. Dominik's right kidney is working at 47% capacity
today, and his blood pressure is off. He gets tested biweekly for protein in
his urine to make sure his only kidney is filtering correctly. He also has
ultrasounds biweekly to make sure the tumor is not growing back. The
doctors do not know what his future will be with this kidney. Dominik sees
the kidney doctor every two weeks and is on kidney and blood pressure
medication. The doctors feel that if his kidney does not improve, he may
need a kidney transplant in the future.
While the doctors were working on finding how to help Dominik with his
tumor and kidney problem, they did not see what was coming next. Thekidney disease started to make Dominik’s body fail. The doctors did not
think he would survive. He developed hydrocephalus which is a buildup
of fluid in the cavities deep within the brain. This extra fluid puts pressure
on the brain and can cause brain damage. The neurologists placed a drain
in his head for weeks and the fluid would not go down, so they later had to
make the decision to place an internal VP shunt in his head. The shunt
helps to release fluid into his body, which takes pressure off the brain. The
shunt needs to be monitored once a month by an MRI. Dominik is
developmentally delayed, and they do not know to what extent because he
is only an infant. Time will shape what he will need in the future.
Dominik also has Papilledema, swelling of the optic nerve, which connects
the eye to the brain. This came from the Hydrocephalus. Dominik went for
a procedure recently to see what damage was done to his eyesight. The
doctor informed Brittany that her son may never have central vision in his
right eye due to scarring from the hydrocephalus. The doctor feels his left
eye has weakened vision but not as bad as his right. He may need a few
procedures in the future to help with his vision.
Dominik has a long road ahead of him. He may need a kidney transplant.
and surgery for his eyes. He also needs to be monitored biweekly by his
doctors for kidney function and monthly for his shunt and MRI. He takes
medicine everyday. Since he is only an infant, the doctors can only do
certain tests on him for his cognitive and developmental needs, and only
time will tell how he is doing. Even though Dominik has an uncertain journey ahead of him, he has a wonderful family that will be there for him every step of the way. 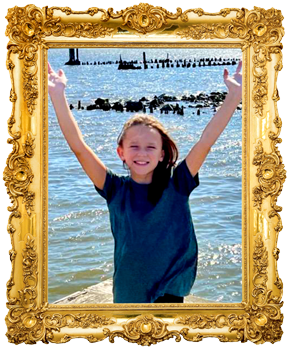 Mae Cunningham is a happy, spirited eight-year-old girl that adores her family, friends, and the entire Pearl River community. Mae considers herself a proud Evans Park Tiger! Mae enjoys spending her time playing a variety of sports, engaging in community functions with her Girl Scout troop, and just being a silly kid with her peers. On October 2, 2022, Mae suffered a stroke that impacted her mobility on the right side of her body and her speech. She underwent multiple surgical procedures at Westchester Medical Center and is currently at Blythedale Children's Hospital receiving extensive physical, occupational, and speech therapy. Mae’s incredible spirit and optimism are the fuel for her successful recovery. Her ultimate goal is not only to regain her normal functions but also to use this experience to serve as a source of inspiration for others facing traumatic medical challenges. 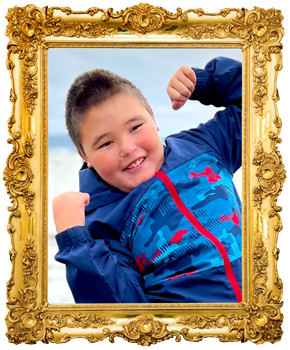 Daniel is currently a 6th grader at Nyack Middle School. His journey began in 2010, when he was born. Christmas morning, at 28 weeks, weighing only 2 lbs. Daniel wasn’t expected to make it more than two days, and at this point is where he began to show his strength and determination. He spent the next four months of his life being transferred to and from 3 different neonatal intensive care units, under the care of countless nurses and doctors, where he required significant support from numerous medical devices. The first four years of his life were extremely frustrating, not only due to his medical condition but also because of inconsistency of the approach to his care. His primary diagnosis was simply prematurity, although Daniel presented with an array of various medical issues ranging from breathing (Chronic Lung Disease), swallowing, (CPD), digestive (severe GURD), motor delays, and cognitive delays, along with other issues due to his prematurity. Daniel would go on to be undiagnosed for 4½ years, being sent to specialists in the state to specialist out of state with no answers. He would eventually be diagnosed with Cricopharyngeal Dysphagia (CPD) which meant he was unable to swallow. This meant Daniel would require a feeding tube in order to receive any nutrition or hydration. He remained on a G-tube for the first 4 years of his life. Daniel went in for his first surgery after only one month. He continued to need surgeries, with the last of them being this past August. Throughout his childhood, Daniel has been admitted to the hospital on many occasions, primarily due to pneumonia caused by aspiration. Since birth, he has been diagnosed with Chronic Lung disease for which he has been followed closely by a pediatric pulmonologist. Since his days in the NICU Daniel has come a long way but still faces many hurdles daily. Daniel has a team of doctors that he sees for various medical conditions. He was found to have a Peniel gland cyst, which requires monitoring by a neurosurgeon. Due to his premature birth, Daniel is not the average sixth grader. He is delayed in his cognitive function. His speech and motor skills are delayed and combined with severe social anxiety which makes it almost impossible to socialize with other children. Daniel is aware of many of the differences between him and his peers, yet he continues to persevere. He is currently being evaluated by a child neuropsychologist in order to help find the most appropriate learning environment for him. He is currently attending a middle school and has been placed in an environment, which is not in his best interest, Daniel is incredibly brave and resilient. Throughout this time, the financial costs of his care have put a burden on my family and my extended family. Due to the situation, we have lived with my parents for the help we need with his care and emotional support. Daniel is a proud big brother and continues to inspire those who know of his difficult journey. 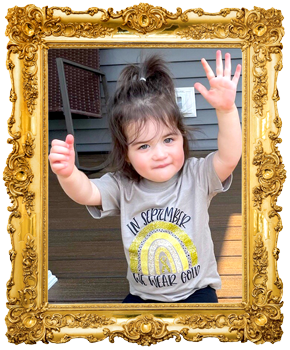 Meet Cassidy Ulrich of West Nyack: Cassidy was diagnosed with glioblastoma, a rare form of brain cancer, at just 7 months old. In February 2020, she underwent surgery at New York Presbyterian to remove most of the tumor on the left side of her brain. After her surgery, she was diagnosed with epilepsy and went on to receive four rounds of chemotherapy at Memorial Sloan Kettering. In September 2020, Cassidy had another brain surgery to try to stop her recurrent seizures, as well as remove more residual tumor. This surgery did not cure her epilepsy, but her neurologist continued to alter her medications to lessen the severity and frequency of her seizures. In July 2021, a routine MRI showed Cassidy had a new small tumor on the right side of her brain. For now, her oncologist has decided to monitor it with scans every 3–4 months. Despite everything she has been through, Cassidy continues to amaze her family. She is now a sweet, happy three-year-old who just started preschool in September and enjoys playing with her brother.

Help these brave, wonderful children by distributing their stories at your next event. By spreading the word and creating more awareness of their families' needs, we can all make a big difference in their lives. 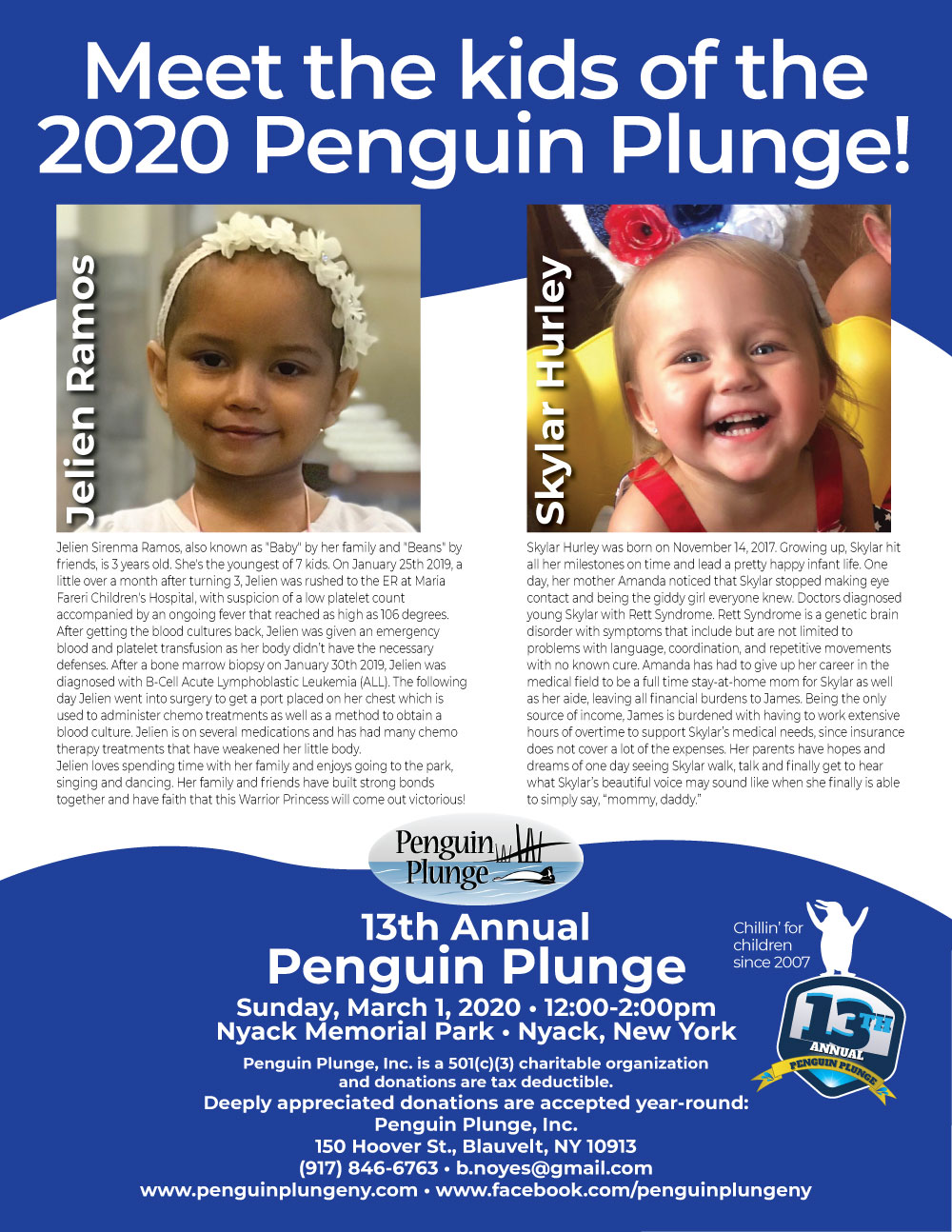